Strip poker is a variation of the poker card game in which players take off their clothes when they lose their bets. It can be played with any type of poker, although normally it is based on simple variations with few rounds of bets, like five cards with discard
It has been suggested that strip poker originated in New Orleans at the same time as original nineteenth-century poker played in brothels.2 However, it is more likely that strip poker emerged as a joke among boys over the decade. of 1930, in England. The current mixed version was called “mixed strip poker” to differentiate it from the exclusively masculine, non-sexual variety. 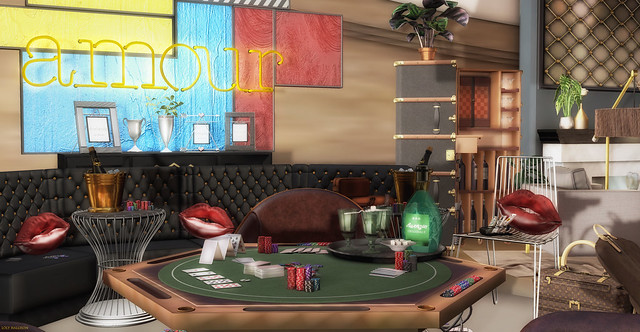 DaD The Wave Skybox @FaMESHed New!!! Feb 2019 (The first floor has a long fireplace that borders one wall and a half circle pool that sits just underneath the circular staircase that is supported by wire beams on each side to lead you to the second floor living space. Apart from it being a great place for living, it is also fantastic for entertainin)

Merak Allison’s Collectibles  @Belle Event (The collection consists of a wall art work, three types of frames, a chair with singles and couples animations, and a little iron side table. Opens 6th Feb.)