“One thing was certain: of all the teachers’ offices Harry had visited so far this year, Dumbledore’s was by far the most interesting… It was a large and beautiful circular room, full of funny little noises. A number of curious silver instruments stood on spindle-legged tables, whirring and emitting little puffs of smoke. The walls were covered with portraits of old headmasters and headmistresses, all of whom were snoozing gently in their frames. There was also an enormous, claw-footed desk, and, sitting on a shelf behind it, a shabby, tainted wizard’s hat — the Sorting Hat.”
—Harry Potter views the office for the first time

The Headmaster’s office is the office in Hogwarts Castle in which the current headmasters or headmistresses of Hogwarts School of Witchcraft and Wizardry work during the school year. It is located in the Headmaster’s Tower, accessed through Gargoyle Corridor. Although this is never mentioned, it is entirely likely that the residence of the headmaster is adjacent to the office. It is reached by means of a circular, moving stone staircase, which in turn is concealed by a gargoyle on the third floor. The gargoyle will step aside in response to a password, though the headmaster is capable of overriding the password if, for any reason, he or she desires that it will not work. 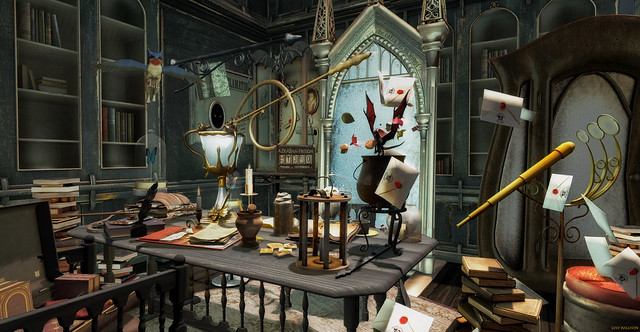 Ionic (different sets at the store)

KraftWork  The Wizard Express Set @The World of Magic NEW!!!

SPELL (old set you can find at the store)

SPELL (different sets at the store)